The Story of Puppeteers

Samuli Seppänen and Petri Lammi are experienced sysadmins who have seen it all. They are passionate about building modern infrastructure wisely and want to make fellow DevOps’ and sysadmins’ life a little bit easier. Read on how they ended up working together and founding this company!
The story of Puppeteers goes back to 2006 when Samuli Seppänen started working in Petri Lammi's company, Tietoteema Oy in Turku, Finland. Back then Petri had been administering UNIX/Linux systems for about 15 years already, and Samuli was a recovering archaeologist hoping to make his long-time Linux hobby a profession. They worked together at Tietoteema for 3 years.

In 2014 they resumed an active collaboration when they noticed that they shared the same technical challenges in their respective jobs, and enjoyed working together. Sharing experiences and knowledge simply made a lot of sense. They also attended meetups such as OpenStack Finland and TurkuSec (not to be confused with the nearly as interesting TurkuSex "meetup").

As both Petri and Samuli were entrepreneurs in spirit, working for common goals was of course not the end of it. In 2015 they launched a Finnish-language website, aimed at publishing blog posts on various DevOps topics in Finnish. "Maybe something will come out of this", they thought. In late 2017 their first customer-to-be reached out to the Puppeteers and after a short while and a lot of bureaucracy Puppeteers Oy was officially born.
At some point, after doing a few rather unscientific tests it was clear that some of their particularly esoteric blog posts ranked very high in Google, even though they were written in Finnish. In order to reach the global audience better, they launched a new website in English in summer 2019.
Since then Puppeteers have continued to crystallize their vision of how to best build and manage modern computing environments. This has led to a range of products and services designed to help with the transition from legacy infrastructure to cloud computing.
Puppeteers 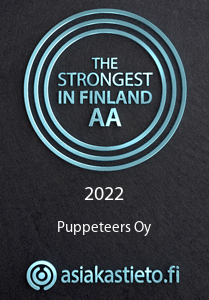